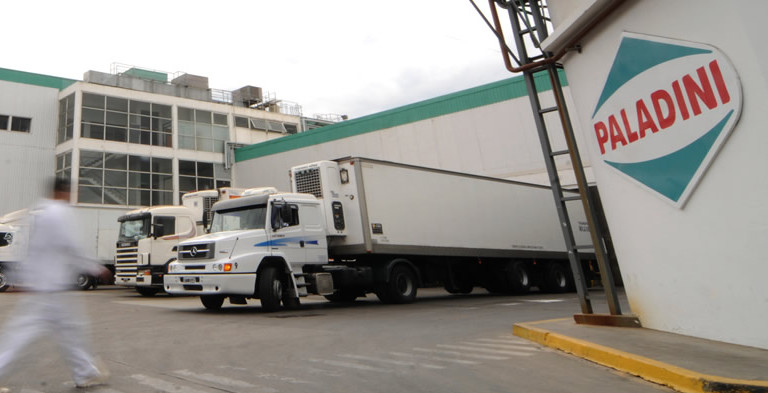 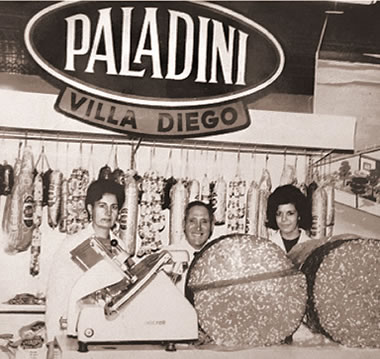 In 1923 Don Juan Paladini moved with his family to Villa Diego, Santa Fe. There he began producing products inspired by recipes from old Italy. He started producing chorizos, black puddings, salamis and bondiolas.

In 1935, Bruno Paladini, a cousin, started working with Don Julio on a daily basis. Those were hard years, when nothing was spared and everything was difficult to get.

In spite of his youth, Don Juan Paladini (40) died in 1938, leaving his wife Maria Davalle and his two older children, Rodolfo and Juan Pablo Paladini - still young- to take care of the business. Together, with Bruno's collaboration, they knew how to continue with the emerging enterprise. Through the years, with much effort and sacrifice, they managed to stabilize the business so that it could become the main support for the family.

In 1958, Juan Pablo Paladini manufactures the first Mortadella as a complement to traditional products, customizing the fundamental milestone in the history of the company. The product becomes very popular among the consumer audience and this begins to generate great demands, transforming the handcrafted production into a small industrial scale.

The activity needs a greater job input and in 1962 the 3rd. brother joins the company:

Pacífico "Tilo" Paladini, who had been collaborating in the business years before and, for health issues, had left the city. His addition gives the company a family structure, although with large scale projections, since one year later the great demand pushes the growth and it is decided to build a factory facility far from the urban area, in the current property of José Piazza, on the banks of the Paraná River.

In 1964 the 4th brother, Roberto Paladini, joined the company, thus consolidating the family bond, a key factor in Paladini's success. Everyone begins to forge a path of dedication, effort and consistency in everyday work. To this, a strong entrepreneurial imprint and challenging leadership vision is added, so a year later the first logo of the company is designed. This logo highlighted the concept of the meat processing industry and its place of origin, which were distinctive arguments of the time.

A giant 300 kilos mortadella is presented at the Rural Society of Rosario in 1968; this fact becomes a success for the audience and media. Paladini validates its preference in the taste and palate of consumers.

Bruno Paladini, permanent collaborator of the company, dies in 1970. The 4 brothers - Rodolfo, Juan, Tilo and Roberto - deepen and hold on to their bond of union and tireless work, thus maintaining it over the years.

During the 70's, the 3rd generation joins the company. They were trained and over the years they were incorporated into the management structure, adding initiatives and maintaining those fundamental principles on which the company was founded: effort, dedication and permanent drive.

In 1973, the brand's logo was redefined, establishing for the first time the famous rhombus shape and its own colors derived from green and red. Years later, the first national projections were drawn up based on a Regionalization Plan, with Distribution Centers all over the country, and thus reaching all the Argentinean tables with its products.

In the early 80s, sales to Capital Federal and Buenos Aires began. Over the years, it was necessary to open the Buenos Aires Branch, and thus consolidate its commercial and logistic leadership at national level. Over the years it continued its strategy by completing 10 distribution centers throughout the country.

In 1985, the historical Frigorific Villa Diego was acquired. Important reforms of its facilities began to transform it into a Slaughterhouse for export, domestic consumption and mainly for sausages, the main business of the company. The facility achieved international certification for the export of Hilton Quota and different beef cuts.

At the end of this decade, the Effluent Treatment Facility and its natural lagoons were built. The investment positioned Paladini as one of the first companies in the country committed to the care and preservation of the environment. In addition, Paladini advances with the merger and acquisition of Cold Meat Processed Store La Arroyense, expanding its business in the national market.

A Vertical Integration Plan is projected in 1992, starting with investments in pig reproduction in the town of Villa Amelia, Province of Santa Fe, the first of almost 3 current pig production centers. In the same line, grain production begins at scale to intensify integration and self-supply. One year later, the brand is redesigned, modernizing its lines, stylizing its apexes and working its typography establishing a more refined character for the time.

In the mid-90s, the company managed to consolidate its industrial leadership in infrastructure with state-of-the-art machinery and technology, professionalization and training of its people through numerous trips to fairs in the United States and Europe. While in the year 2000 it certified its production with ISO 9000 to Quality.

A new decade begins and Paladini launches its Selected Line in the market. A portfolio of premium variety with selected raw materials and the history of traditional recipes from its origin Lucca, Italy.

In 2005 the company is certified with ISO 14.000 in Environment. In the same year, the "smoke-free" standard of the province of Santa Fe was established.

The second Swine Reproduction Farm in La Toma, San Luis, starts operating in 2010. With this investment, the company manages to become the number one pig producer in Argentina, with a total of 9,200 mothers and a population of 122,000 constant pigs.

While the newspaper La Nación ranks Paladini as the 11th company with the best reputation in the country (a study carried out by the Reputation Institute of the United States in conjunction with the IAE Business School of Argentina), in 2011 a new redesign of the brand's logo is being carried out, bringing it up to date.

2011 is the year in which the company, the undisputed leader in the national cold cuts market, based on the same values imprinted by its founders and guided by its Strategic Plan 2023, defines a new challenge that is to become a leading food company. Thus begins a stage of diversification of its business portfolio and brands, where in 2012 the launch of its line of cheeses and in 2013 the incorporation of the line of chicken batter with its nuggets and medallions stands out.

In 2013, the company will begin operations at its new 15,000 m2 pig slaughtering and rendering facility with state-of-the-art technology worldwide. That same year the 4th generation of the family joins the company, endorsing the dream of those Italian immigrants who settled in Villa Diego in 1938 and who, with effort, dedication and vision, dreamed of a company that would last over time.

As part of the growth of the business, in 2014 the product portfolio of its Select Line is redesigned and the L'abratto brand is launched, which quickly becomes a reference brand for Premium products. In addition to the diversification of brands and products, the company also continues to focus on two key factors in its success: its own distribution chain and branches, and its industrial facility. Thus, as part of the plan to adapt to new demands and challenges, in 2015 the new branch in Tucumán will be inaugurated, which will be decisive in consolidating the leadership in the northwest region of the country, and the new clean room for sliced, the new machine room and the new sector for preparing pasta will be put into operation.

In 2016, the Group acquires the business of the Spanish company Espuña in Argentina, adding this brand to its portfolio. Espuña is the leader in the Argentinean matured market and its industrial facility in Pergamino. In this year the third pig production center is completed in La Toma, San Luis, consolidating the national leadership with 12,000 mothers.

Consolidating its character as a leading company in food, between 2017 and 2018 the line of Soya Beans, Frozen Potatoes, Pastas and Tapas is launched; and the position in the hamburger market is consolidated with the launch of the pork burgers under the concept of Funburger.

During 2019, in pursuit of the same goal, the new Reduced Sodium Boiled, first product of the Permí line, is released on the market. In addition, that same year, Paladini became the first facility in the country to be authorized to export to China. In September, the first shipment of frozen pork meat took place, doing Customs at the Paladini Plant.